Several new pieces of science art have been created, thanks to participants in a recent social event.

The event was held virtually as part of the 2021 National Science Policy Symposium, which brought together over 400 science policy enthusiasts to connect through panels, workshops, networking events, and more. An evening art activity facilitated new connections between attendees and between the ideas presented at the Symposium.

Organized by Lyndsey Gray, NSPN’s Science Diplomacy Committee Chair, the event was intended to encourage attendees to form social bonds, reflect on the theme of the Symposium, and express their reflections through a creative outlet.

Attendees participated as part of a group or individually. Some chapters gathered in person or virtually to create art together, while others participated individually while gathering virtually with participants from across the country. Attendees were encouraged to create visual, verbal, musical, or multimedia art pieces centered on a chosen prompt. Prompts offered the opportunity to reflect on topics such as energy, life science, social science, and equity.

One group from the University of Pennsylvania chose to create a painting about energy democracy and labor. “We’ve spent about 10 hours on our painting so far: brainstorming, researching policies in other countries, reading the latest scientific evidence on innovative sustainable technologies, incorporating insights from [the Symposium’s] panels on Energy Democracy and Labor, sketching, and painting,” said Erin Reagan, President Emeritus of the Penn Science Policy and Diplomacy Group and NSPN’s Chapter Support Committee Chair. “It became a fantastic community-building piece, as each participant was able to contribute to an idea, a sketch, or the painting of an integral component of the overall piece.”

Another group from Northwestern University created 3D visual art centered on their ideal vision of a sustainable city and sustainable innovation. “We used oil, acrylic, and watercolor paint along with colored pencils. Our work is presented on a canvas with part of the work on elevated mini canvases,” said Kavi Chintam, President of the Science Policy Outreach Taskforce at Northwestern and NSPN’s Advocacy Committee Chair. The group found inspiration for the piece in their local transportation. “The Chicago Transit Authority (CTA) in Chicago provides train service to different areas of the city. However, certain neighborhoods in the city, namely low-income and POC-concentrated areas, contain less or no stops and less frequent service (e.g., none during weekends). Our work displays the current CTA routes in gray with the Chicago River and Lake Michigan as points of reference. The routes in green are added to increase accessibility. The neighborhoods depicted on the side are those we chose to prioritize when drawing new routes. Each illustration contains hints to the culture and landmarks within each neighborhood.”

A third group from Rutgers University chose to create a painting depicting the connection between biodiversity and climate change. “Our piece is meant to capture the calm chaos of global climate change placing humanity in our biodiversity and highlighting the clash of society with nature,” said Heidi Yeh, Co-President of Science Policy and Advocacy at Rutgers. “We paint in bold acrylic strokes in some parts of our piece and in soft or subdued styles to reflect biodiversity in the artistic diversity.” 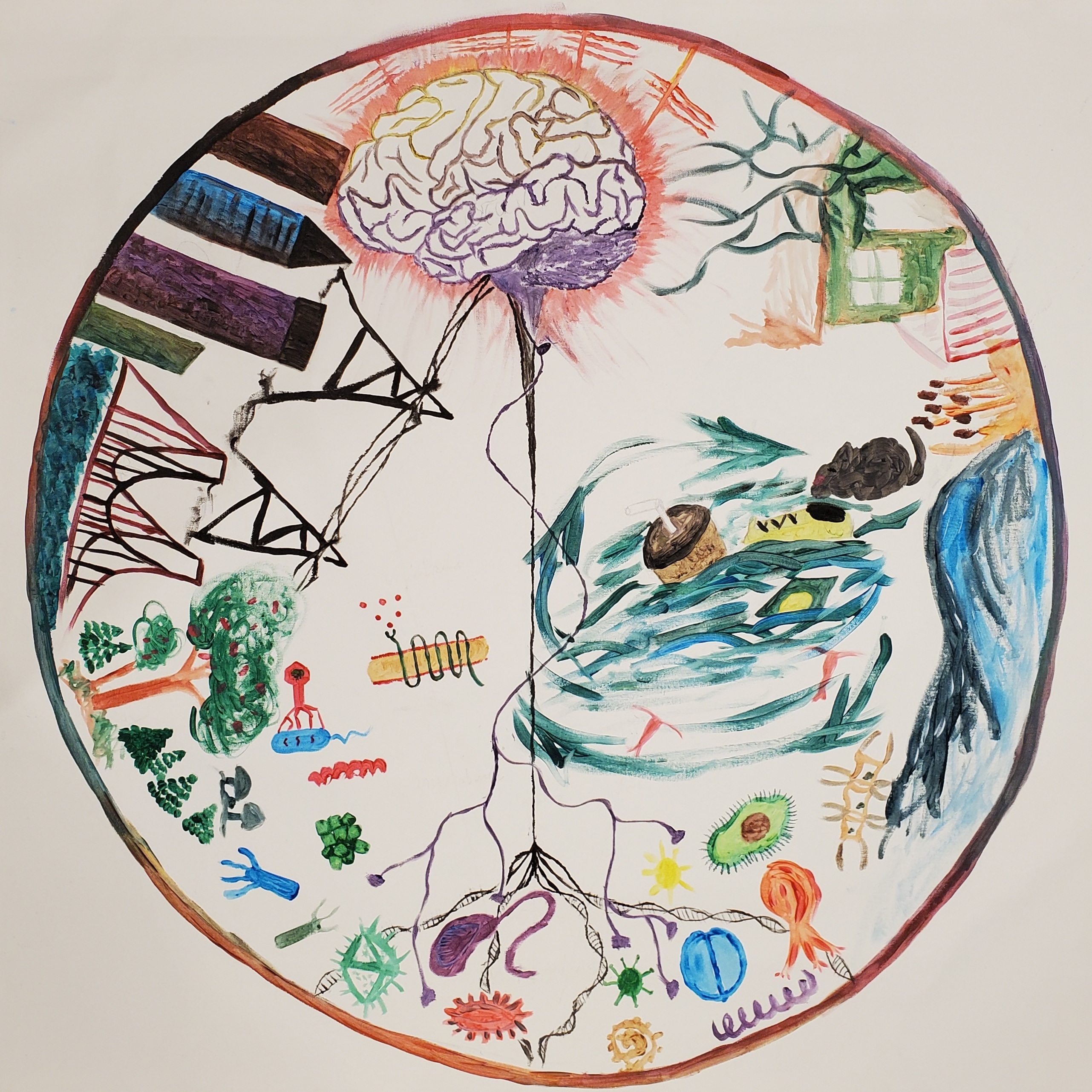 Other individual attendees found their own creative voice. Opeoluwa Oyewole chose to follow her own prompt by turning to the kitchen. “I made mini-cheesecakes with raspberry topping and mini-cheesecake brownies,” said Oyewole. “I love baking and chose to make cheesecake because it's one of the easier things to bake. In order to not waste the extra cheesecake batter, I made the brownies too. [This activity] made me think of how to repurpose what we might sometimes consider waste to reduce our need to process more waste and finding out about ways to do so, such as the companies in Nigeria and Kenya repurposing plastic bottles as building materials, or artists using plastic bottles for their art.”

NSPN hopes the event will inspire continued conversation, creation, and collaboration among members. For the Pennsylvania group, the activity may inform future programming: “We’re even thinking about using this painting as a catalyst to begin a series of policy memos, outlining each of the policies being proposed on the canvas,” said Reagan. “We see it as a roadmap for system-wide policy transformation.”