NSPN recently held elections for Regional Hub and Committee Chairs including leadership positions for several new Committees. You can read more about this new leadership structure, the goals of each committee, and how they will advance NSPN’s mission here. Read on below to meet the new leadership team and learn a bit about them outside of their Committee work within NSPN. 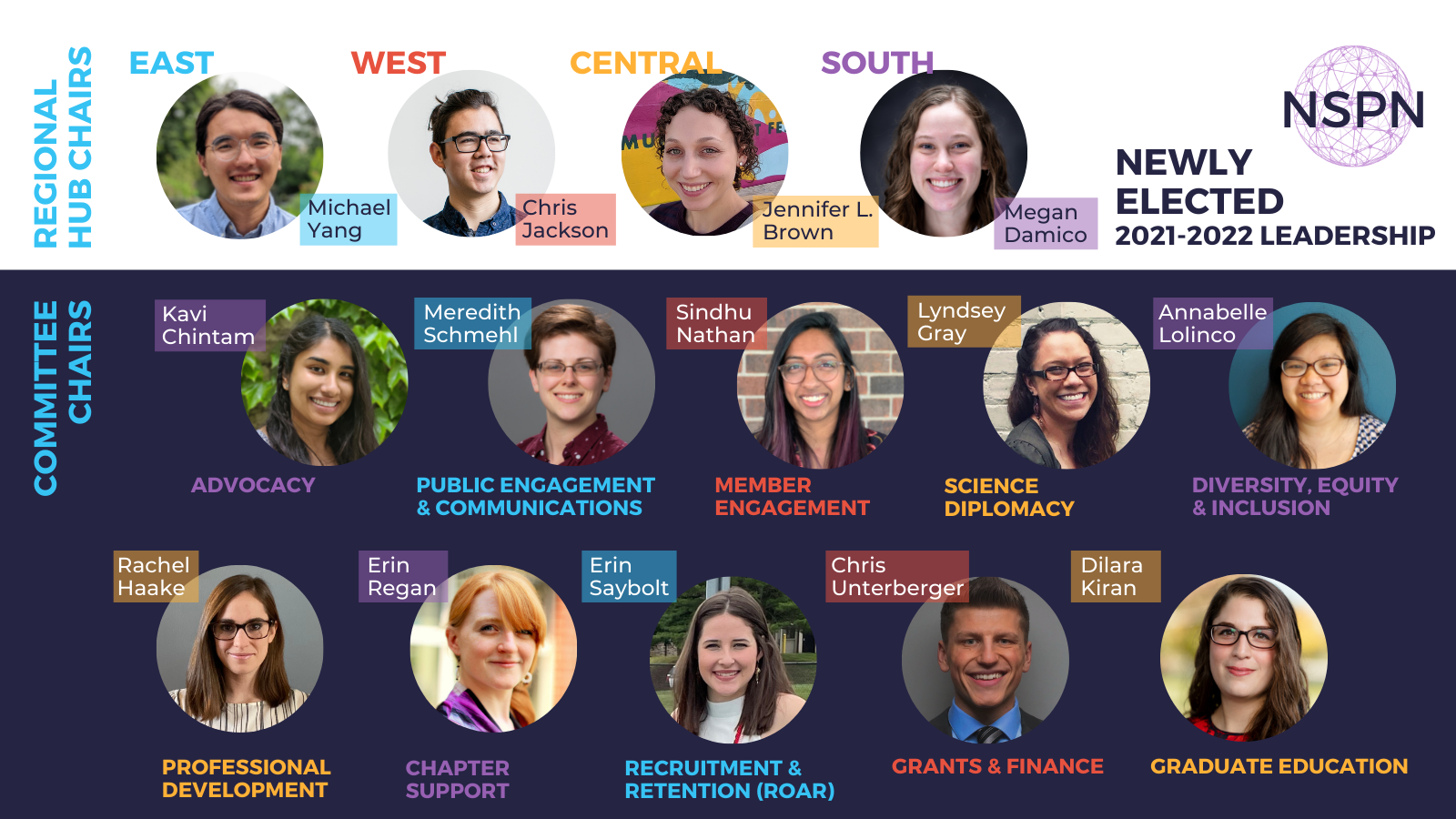 We are very excited to have four new Regional Hub Chairs to help us transition, develop, and focus the new role for our Regional Hubs this coming year.

The Eastern Hub transition will be led by Michael Yang, a Ph.D. student at Australian National University and an intern at the Center for Democracy and Technology in the greater New York City Metropolitan area. Michael shares that outside of science policy he loves being a bad birdwatcher and a bad classical pianist, insisting that it is more fun when you don’t know anything.

Interestingly new Southern Hub Chair Megan Damico also identifies as an avid birdwatcher. She loves birds and works with girl scout troops to build leadership projects around bird conservation when not doing science policy or working on her Ph.D. in environmental health sciences at the University of North Carolina, Greensboro.

In the Central Hub Jennifer L. Brown will take the lead on shaping these new regional projects. Jennifer is a joint Neuroscience Ph.D. and J.D candidate at the University of Minnesota. In addition to her research and science policy work Jennifer enjoys writing book reviews for science fiction and fantasy novels. She also has a pet parrot who occasionally makes an appearance in her zoom calls.

Chris Jackson, a chemistry Ph.D. candidate at the University of California, Berkeley, will be the new Western Hub Chair. Chris shares that before graduate school he lived and taught English in Thailand.

For our Committees we have several returning and many new faces to help shape the work of NSPN’s many projects and programs.

Working closely in tandem with the regional hubs, the new Advocacy Committee will be led by Kavitha (Kavi) Chintam, a graduate student at Northwestern University in Chicago. When not in the lab or doing science policy and advocacy work, Kavi loves running in different neighborhoods and then eating the best food and desert wherever she is.

The expanding Communications Committee team will include two committees this year, Member Engagement, and Public Engagement & Communications, which will be chaired by Sindhu Nathan and Meredith Schmehl, respectively. Sindhu is a Ph.D. candidate in chemical engineering at Stanford University, and loves doing not only 2D, but also 3D jigsaw puzzles. Meredith, a neurobiology Ph.D. candidate at Duke University, has played the cello since she was 9 and enjoys playing in orchestras or small groups whenever she can.

Three final new NSPN committees will focus on the development of individuals, chapters, and the broader science policy community.

The Professional Development Committee will be led by Rachel Haake, a Ph.D. candidate (for a few more weeks), at UNC Chapel Hill. Besides hustling to graduate in August and find a new post-grad position Rachel enjoys listening to and seeing Phish live in concert (as well as a few other jam bands).

Erin Reagan will transition from her former role as Eastern Hub Co-Chair to lead the effort of developing a new Chapter Support Committee. A graduate student studying vaccine design at the University of Pennsylvania, Erin loves gardening and has dreams of one day running a homestead.

The Recruitment, Onboarding, and Retention (ROAR) Committee will work to expand who is at the science policy table in collaboration with the DEI College Tour and other committees. Erin Saybolt, currently a Program Assistant at the AAAS EPI Center, will lead this charge when not busy doing her other science policy work or being active outside and playing sports, including field hockey which she has played for over ten years.

The evergreen and ever essential Diversity, Equity, and Inclusion Committee will be led, yet again by Annabelle Lolinco. Annabelle is a chemistry education graduate student at Iowa State University in Ames, Iowa. Annabelle shares that she loves to cook and try new recipes, sharing the fruits of her labor whenever she can. She is also especially fond of fun, cute stationary and office supplies to support her bullet journaling and occasional letter writing to friends.

Dilara Kiran will also return this year to run the Graduate Education Committee once again. Dilara is a Doctor of Veterinary Medicine candidate at Colorado State University. Outside of saving puppies and working to improve graduate education Dilara has played the French Horn for more than 15 years and shares that she is most fascinated by the platypus which is one of only two egg laying mammals.

This coming year the Science Diplomacy Committee will be chaired by Lyndsey Gray. Lyndsey is a microbiology Ph.D. Candidate at Colorado State University and also a NSPN SciDEAL Fellow. Lyndsey shares that she adores dinosaurs and was impacted incredibly by both the Jurassic Park book and movie as a child. While she didn’t end up becoming a paleontologist she still has dinosaur figurines covering her work desk and lab bench and has reptiles for pets.

Finally, the Grants and Finance Committee Chair will be Chris Unterberger. Chris is a Ph.D. Candidate in pharmaceutical sciences at the University of Wisconsin–Madison. In addition to research and science policy Chris enjoys watching movies and falling down rabbit holes on IMDb learning unnecessary (but perhaps sometimes useful if he is on your team!) trivia about them.