Sindhu Nathan is a PhD Candidate in Chemical Engineering at Stanford University and an active member of the Communications and DEI Committees as well as the 2020 Election Initiative. 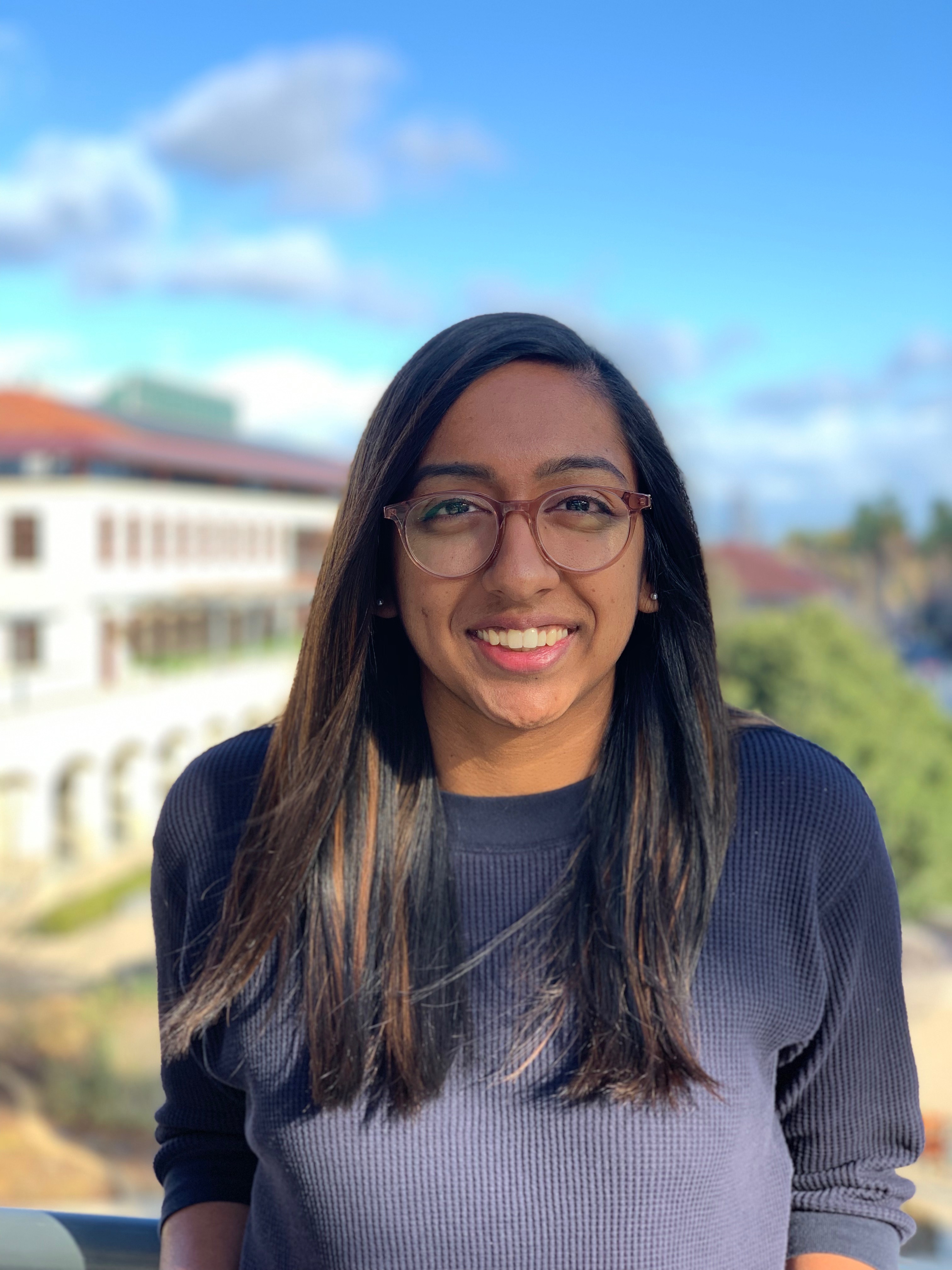 What is your research about?

Probably like a lot of people, I went into graduate school envisioning myself in an academic career. Climate justice and clean energy solutions had always interested me, like in middle school when I watched Al Gore’s “An Inconvenient Truth” in science class or in high school when I somehow ended up at a research talk about engineering algae to produce renewable biofuels. I got hooked on the idea that I could apply what I learned in my favorite class (chemistry) to address global climate and energy challenges.

This led me to study chemical engineering as an undergraduate, and eventually to Stanford! Here, I design and characterize materials that convert carbon dioxide and carbon monoxide to valuable fuels and chemicals, an important part of the carbon capture and utilization cycle. My research group uses a technique called atomic layer deposition (which, as the name suggests, allows you to deposit layers of atoms). We use this technique precisely in the materials we make. Since my research tackles energy efficiency and decarbonization from a “basic science” perspective, it sometimes feels challenging to connect my findings to the bigger picture, which is what opened my eyes to the world of scientific communication.

Getting into science policy was a fortuitous accident – in my second year of graduate school, I got to take an awesome class taught by Ali Zaidi, who was an adjunct professor at Stanford after working in the Obama administration for 8 years. I had my first experience writing a federal “moonshot” proposal on electrifying public transit, which was really challenging but opened my eyes to science policy. I then attended a workshop in Washington, D.C. (similar to, but not the CASE Workshop) – I actually met several NSPN members there without knowing! At that point I got super motivated to pursue science policy seriously, which is when I discovered and joined NSPN.

How are you involved in NSPN?

I’m involved in a few committees and activities in NSPN, primarily Communications, the 2020 Election Initiative, and DEI (although if I had time to do it all, I certainly would). I recently took on the Vice Chair role in the Communications Committee, where I support Meredith Schmehl (the Chair) on sharing all the cool work members are doing and creating a space for science communicators to develop their skills and shine. I also organize the monthly virtual science policy happy hours (which everyone should check out)!

Recently, I organized a workshop on effective op-ed writing, which was spun off some of the work I do in the 2020 Election Initiative as an op-ed track lead (shout-out to the other track leads, Coleman Harris and Lizzy Zale). And I also partnered with the California Science Debate team to write some of the questions (primarily related to energy) and reach out to candidates for the recent election. I was also very excited to co-organize the Climate & Environmental Justice panel at the National Science Policy Symposium this year with Ankita Arora. It’s been lovely to be a part of this organization and get to know so many passionate advocates from beyond the bubble of my institution.

Where are you involved in science policy outside of NSPN?

Beyond NSPN, I’ve explored science policy a few ways. I’m an associate editor for the Journal of Science Policy & Governance, Vice-President of Stanford Science Policy Group, and recently, I completed an internship at the California Energy Commission in Commissioner Patty Monahan’s office. In that job, I worked on projects focused on making transportation electrification equitable for Californians. I’m so thankful to have been able to work on something so important and to really focus on energy solutions for real people in my community. A lot of the work was pretty familiar – looking into the literature and analyzing data to draw conclusions and make informed policy decisions. The intersection between the research I do now and policymaking is stronger than I expected when I first learned about this path, and I’m so excited to continue developing my research and advocacy skills as I finish up my graduate career and continue beyond.