As this year's International Policy Memo Competition, co-sponsored by the Journal of Science Policy and Governance (JSPG) and the National Science Policy Network, approaches its deadline for submissions, we took some time to chat with some of the folks from the University of Pennsylvania science policy group (Penn Science Policy and Diplomacy Group [PSPDG]), Erin Reagan and Shannon Wolfman, on their first-place memo and what they have done since then.

This is a joint blog post between the Journal of Science Polilcy and Governance and the National Science Policy Network. The JSPG version is located here. 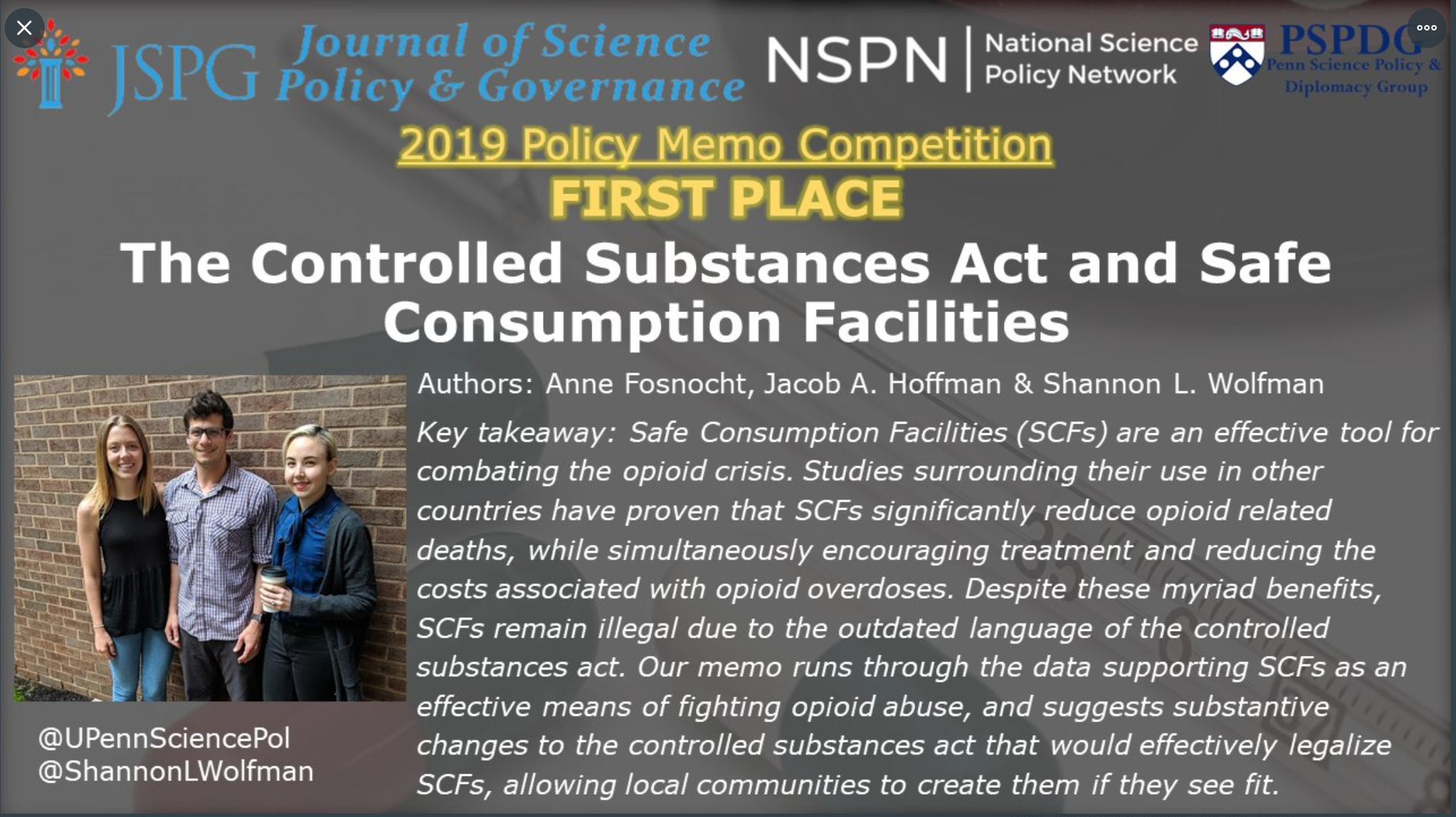 What was your policy memo about, and what inspired you to write about it?

SW: Our memo was about supervised consumption facilities (SCFs), which are facilities where people in active addiction can bring their own previously-obtained illicit substances and use them under medical supervision. The main purpose of these facilities is to prevent overdose deaths. There are a lot of reasons that our team landed on this topic, including the fact that two members of our three-person team study the neurobiology of addiction, making this topic especially interesting to us.

We became specifically interested in supervised consumption facilities as a topic because we live in Philadelphia, which has been one of the hardest-hit cities in the country by the opioid epidemic. At the time that we were choosing memo topics, Philly was just starting to move forward with opening what would be the first supervised consumption facility in the United States. Almost as soon as these plans were announced, the US Attorney filed a lawsuit to stop the opening, citing the Controlled Substances Act. These developments were a big deal locally, but they were also making national headlines. Other cities around the country were watching Philadelphia to see whether they might be able to open their own such facilities to prevent overdose deaths. Being scientists in the epicenter of the epidemic and the controversy, it seemed like that was the perfect time to be weighing in on that topic.

How did your group assemble and delegate work on the memo?

SW: We got together as a group just after the workshop that we helped present with the Penn Science Policy and Diplomacy Group (PSPDG) on how to write a policy memo. Then we met two or three times over the next couple of weeks to discuss how to proceed. We knew when we formed our group that we wanted to focus on supervised consumption facilities, but we weren’t quite sure who to target with the memo or what exactly to recommend. So our first meeting was spent figuring out what we didn’t know but would need to find out to decide exactly what to suggest to whom.

By chance, a former PSPDG president was running for a city council seat in Philadelphia around the time we were planning our memo-writing workshop and forming memo teams. He had asked me to write him a policy summary on supervised consumption facilities for the campaign. That made writing the memo a lot easier because I had already done a ton of reading about the research on these facilities and produced a summary that the other members of my group could use as a starting point to get up to speed.

Once we had a few major topics that needed researching, we each took a couple of sections so that we could make the decisions at the following meeting. For example, what exactly was the legal basis for the US Attorney blocking the opening of the facility? Which level of government, and which branch of government, could we target? So we researched our parts, and when we came together, we discussed all that we had learned and talked through the pros and cons of our options. We ended up targeting the US Senate Committee on Health, Education, Labor, and Pensions because one of our senators in Pennsylvania is on that committee, and that committee would be a likely committee to review any legislation related to supervised consumption facilities. We focused on the federal government because US Attorney William M. McSwain was the main obstacle to Philadelphia opening a supervised consumption facility at the time—not the Pennsylvania Attorney General’s office or the Philadelphia local government.

We followed this same process of divvying up research topics and then meeting to discuss and make decisions on everything about the memo, from what exactly our policy suggestion would be out of all the possible things we could ask for, to how we should frame our argument given the political climate around supervised consumption facilities. We used the same divide and conquer approach for the actual writing, using google docs so that we could all edit each other and make the document cohesive. It was really amazing to me how something that felt so daunting and impossible became totally manageable with a team and clear division of labor.

What was the most surprising thing your group learned while researching the memo?

SW: It’s hard looking back and trying to remember what we didn’t know, now that we know it! We learned a lot about the research that’s been done on supervised consumption facilities, and it turns out the fears people have about them that seem quite reasonable have actually not been born out by the evidence. For example, people worry that opening a facility where drug users can use drugs without fear of arrest or death would bring more and more people in addiction to the area. But in reality, only people who have insecure housing are likely to use these facilities, and that group of people is unlikely to travel more than a few blocks to use such a facility.

I think that we were also pretty surprised by how much money can be saved by implementing harm reduction policies like supervised consumption facilities. In addition to lives saved, these facilities improve the health of people in addiction by preventing the spread of hepatitis C and HIV and by reducing soft-tissue infections through education about proper injection techniques. These illnesses are huge public health and economic burdens. 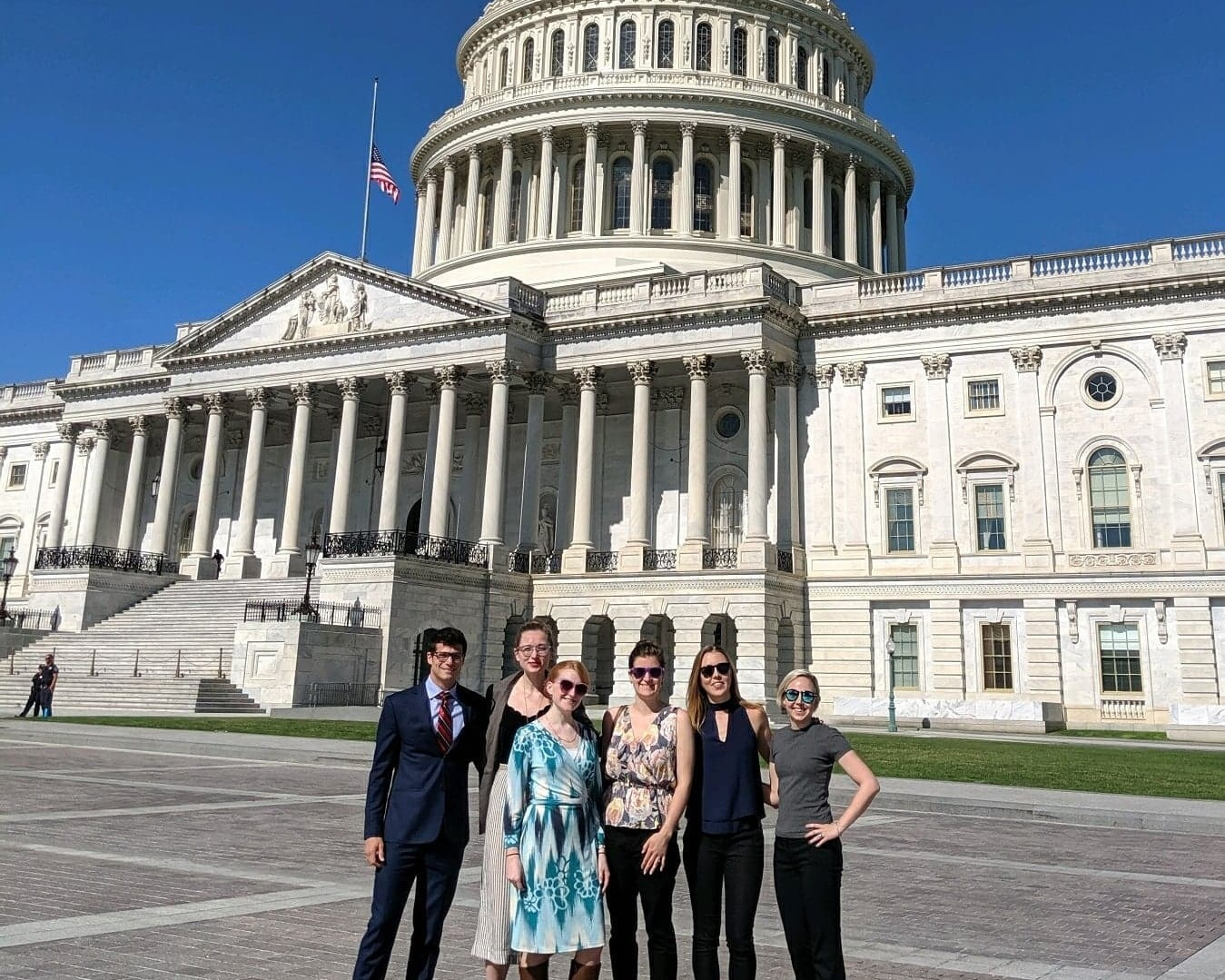 ER: We planned out an entire academic year’s worth of science policy programming using those funds. In Fall 2019, we hosted a panel discussing Science & Technology Policy Fellowships at the Federal and State levels, which was well-attended by students from programs across the university. We have already hosted a panel discussing the different ways scientists and scientists-in-training can work to get science integrated more deeply into the policymaking process, including running for elected office or serving on a commission, serving as a science policy fellow, or engaging in advocacy work as a full-time scientist. We also hosted a workshop on the importance and construction of a high-quality policy memo, featuring extensive explanation from our winning policy memo team as well as an overview of best practices (video here!) In March, we hosted a workshop called Navigating the Legislature about how the legislative branch of government operates at the Federal, State, and Local level and what avenues exist for advocacy within those ecosystems. Finally, we plan to use the remainder of our funding to support travel to Washington, D.C. and Harrisburg, PA for PSPDG members who submitted memos to the 2020 NSPN-JSPG competition and wish to discuss the results of their efforts with staff in Congress and the Pennsylvania General Assembly.

How did you advocate for your policy memo with Congressional staffers? How did you prepare?

ER: Three of the people from our six person team in DC had not taken part in the researching and composing of the memo, so we all took the time to familiarize ourselves with it ahead of time and met with the authors to ensure we were all on the same page. I scheduled our meetings, using every connection we could, to end up meeting with the offices of Guy Reschenthaler (R-PA 14), Conor Lamb (D-PA 17), Brad Schneider (D-IL 10), Dwight Evans (D-PA 3), Chrissy Houlahan (D-PA 6), Bernie Sanders (I-VT), Elizabeth Warren (D-MA), Bob Casey (D-PA), and Pat Toomey (R-PA). Knowing that a few of these individuals were Republicans, we considered approaches that focused more on financial responsibility and avoiding taxpayer expenses. Because I study infectious diseases like HIV and HCV, I looked up how many new HIV/HCV infections a SCF would prevent and how much we currently spend on treatments for them. For staff of Democratic Congresspeople, we focused more on the impacts to infectious disease, opioid overdose preventions, and referral to treatment. For every meeting, we identified members of our group who had personal connections to the opioid crisis and helped those members prepare to share their stories with the staffers.

What tips can you offer to fellow Policy Memo Competition writers?

SW: The biggest advice I have is to just go for it! Honestly, the more people I meet in any field, the more I realize that nobody ever feels like they know what they’re doing. I was recruited to put together a workshop on how to write a policy memo when I had never written one or even thought of writing one before ever. But I learned, and I did my best, and I wrote a memo, and it won! I still don’t feel like I know what I’m doing, but I do know that I’m learning and getting better, and I’ve really come to believe that even if you fail, the trying matters.

What are your plans for continuing the work of your memo?

SW: Well, we have some plans for adapting our memo to the state-level, but things are rapidly evolving in Philadelphia around supervised consumption facilities at the moment. Since writing the memo, a federal judge has ruled that Philadelphia could proceed with opening a supervised consumption facility, and plans were moving forward quite rapidly. This rapidity was met with some severe public backlash, though, so we decided to write an op-ed for our local newspaper advocating for the opening of the facility. Unfortunately, the op-ed rapidly became obsolete due to events on the ground. So, for the moment, we are keeping an eye on progress to see if an opportunity arises for us to be useful in the discussion. If we were writing a memo right now, I think it would probably focus on city council here in Philly instead of the federal government.

Shannon Wolfman (left) grew up in Tampa, Florida and earned her Bachelor of Science in Neurobiology from the University of Florida (go gators!). She completed her PhD in Neurobiology at the University of Chicago in 2016 and is now a post-doctoral research fellow at the University of Pennsylvania. Her research focuses on the neural circuits that underlie drug addiction and is currently investigating the co-abuse of nicotine and opioids in mouse models. As policy co-chair, she works with Erin to develop and organize policy initiatives and events, maintain relationships with professional societies, and coordinate participation in science policy meetings.

Erin Reagan (right) grew up in rural Pennsylvania, not far from Philadelphia. She earned a Bachelor of Science degree in Biochemistry and Physics from Hofstra University and is currently studying Cellular and Molecular Biology as a PhD Candidate at the University of Pennsylvania. Her current research involves designing and testing a vaccine to prevent Hepatitis C.  As the President of PSPDG, Erin is involved in many aspects of the group. She manages relationships with outside organizations, guides the executive board in long-term strategies, coordinates financial planning, leads Policy initiatives with Shannon, and creates Communication content in video form. She also manages the website.

Penn Science Policy and Diplomacy Group creates and provides opportunities for students and other science trainees at the University of Pennsylvania to get hands-on training and experience in the fields of science communication, policy, and diplomacy. Visit their website here or follow them on Twitter at @UPennSciencePol. 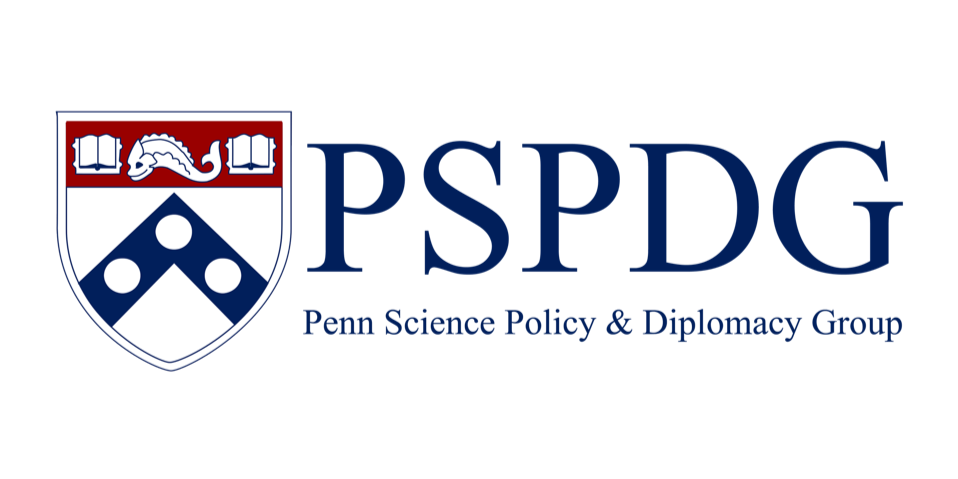